The feast of the Gods 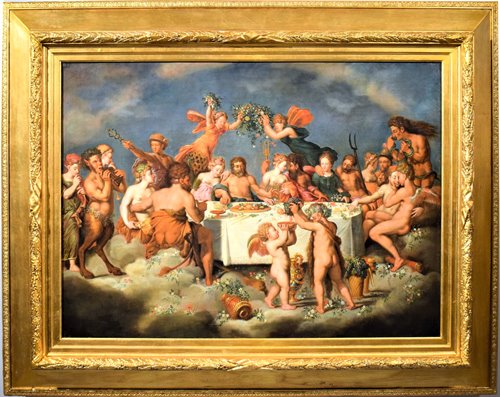 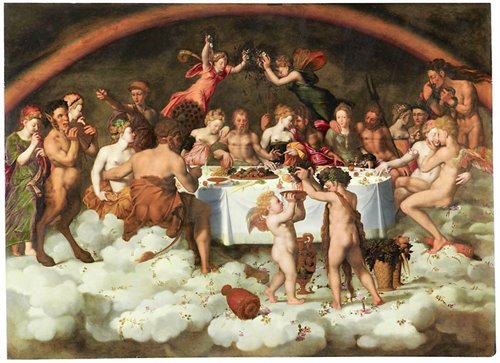 "The Party of the Gods"
Flemish Mannerist Master
Oil painting on canvas
Late 16th century, first 15th
Important golden frame
Canvas  116 x 86
Frame  153 x 123
Very good condition
Restored and relined in 1896
The splendid large canvas excellently depicts a particularly sumptuous and characterful banquet scene.
It is the party of the Gods to celebrate the marriage of Cupid and Psyche.
All the most important Gods of Olympus take part, arranged in order on a horizontal line.
The composition is truly spectacular and the viewer's gaze is not focused on a main protagonist but is in constant movement attracted by a succession of details.
The figures are described in such a way as to be able to recognize them with their attributes and classic couplings, in a riot of fruit and flowers scattered everywhere.
The party appears very balanced, in the most rigid sixteenth-century dictates, with an evident erotic charge.
The naked and markedly muscular bodies of the gods contrast with the pale complexions of the goddesses who show themselves ostentatiously to the bare breasts.
The work is a remarkable work by a Flemish artist inspired by Italian Mannerism, in particular by the frescoes of Raphael at the Farnesina and by Giulio Romano at Palazzo Te.
A very similar canvas, evidently by the same author, is exhibited in the Dijon museum in France with the attribution to an unknown Flemish painter executed between the end of the 1500s and the beginning of the 1600s.
The painting was restored in the late 19th century by the French painter Prevel d'Arlay who dated his intervention to the back of the canvas.
The work is in truly excellent condition and is enhanced by an important gilded frame in a neoclassical style perfectly in tune with the subject of the painting.
Banchetto contact us
back